As an early birthday present, my mom took me out for a day trip. By accident we stumbled across a hole-in-the-wall shop called “Vintage Garden.” From the street I could see a teapot in the window, and that was enough to get me inside. We walked through the waist-high picket fence door into a pleasantly crowded world of potted flowers, soaps, bird cages and tea cups.

And the best part? The statues of geese and ducks that poked their beaks out from under tables, into soap dishes, and from behind chairs all over the shop. Now we’re speaking of geese!

The ambience of the shop contrasted sharply with the streamlined hustle of our tech-entrenched society. It reminded me that in spite of all our advances, humans still hunger for a quieter surrounding, one that fills them with a sense of wonder and whimsy, one that can make them forget all their worries.

Mankind’s quest for peace will never end in a picture-perfect array of knick-knacks, because the atmosphere of serenity that things can create is short-lived at best. It is only when we submit ourselves to the Prince of Peace that we can find lasting rest for our souls. Only then will we be able to appreciate life’s little pleasures rightly: as loving gifts from our Lord.

In 1969, Disney’s “Wonderful World of Color” television program aired a three-part movie starring Kurt Russell, Glenn Corbett and Patrick Dawson called The Secret of Boyne Castle (UK: Guns in the Heather). Though the film is not commercially available, we were able to get a recording when it played on the Disney channel many years ago. The screenwriting is sometimes cheesy, and certain plot points are laughable, but it has always been one of my favorites. I think it’s because it takes place in Ireland.

Filmed partly on location, Secret of Boyne Castle follows two students, Richard and Sean, who find themselves mixed up with a spy ring from behind the Iron Curtain. Adventurous chase scenes, daring escapes and fast-paced espionage are glued together with charming slices of Irish culture for a story that’s just plain fun.

Of course Boyne Castle is a fictional place created for the movie, but I’ve always been curious where the crew shot the castle scenes. Was it a combination of several places, or even a set at Pinewood Studios? My searches had always yielded nothing, but today I found my answer.

At home with a head cold, I wanted to watch something lighthearted, cheerful, Irish. In went Secret of Boyne Castle. As I followed Richard and Sean’s escapades, I paid closer attention to place names than I had before. Soon I realized that the climax of the film was supposed to take place in Clew Bay, off the coast of Westport in County Mayo. An Internet search brought me to a list of mansions and castles in or near Connacht, a northwest province of the Republic of Ireland.

A long shot maybe, but one that paid off. I clicked on the link to Dunguaire Castle in Galway, and there it was, big as life, the legendary (in my book) Boyne Castle. 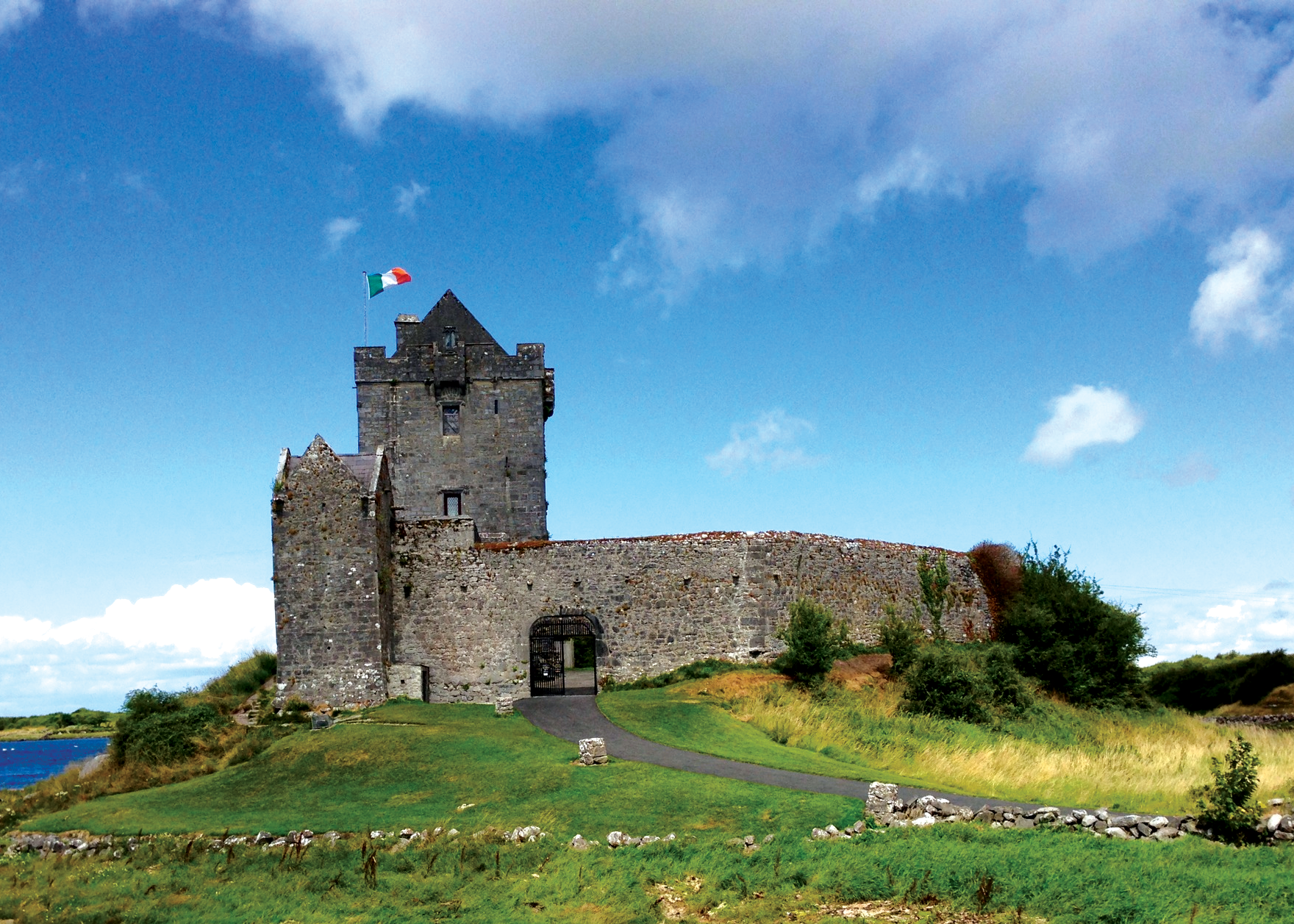 As I labeled it on my map, I realized that during my own visit to Ireland, I had driven within the vicinity of the fortress without knowing it. So close …

Now I have another reason to return to Ireland.

And at last I know the secret of Boyne Castle.

KOST 103.5 claims to be “the best way to spend the holidays,” playing ’round the clock Christmas music to make us feel good for the season. But in its attempt to capture the spirit of Christmas, the station has evacuated the holiday of everything it truly celebrates: Jesus is essentially absent from the playlist.

I didn’t say completely absent — I’m glad to see on KOST’s playlist that “Joy to the World” still makes the queue once in a while, but for a holiday that commemorates the birth of the Messiah, the discrepancy is sickening.

What do I expect? Our American society tries its hardest to cast out Jesus, and naturally our radio stations follow suit. Biblical Christianity and those who uphold it are sidelined, but it’s no surprise since Jesus said, “If the world hates you, know that it has hated me before it hated you. If you were of the world, the world would love you as its own; but because you are not of the world, but I chose you out of the world, therefore the world hates you” (John 15:18, 19, ESV). People hate the gospel of Jesus Christ, because deep down inside they know it’s true, and since it’s true, they’re accountable to God for their sin.

But accountability is only the beginning of the story. Yes, we are guilty as charged, but the very God whose law we broke sent His only beloved Son to take the full consequences for our sins instead of us. He became a man in order to die — and He died so we could live forever with Him in heaven.

So keep on singing those old, forgotten Christmas carols — they’re full of good news of salvation for “poor lowly people,” for wretched sinners in need of a Savior. Don’t leave Christ out of Christmas — you do and you reject the only hope you have.

Anyone who knows me could tell you that yarn crafts are not my thing. I once managed to render a square knitted dishcloth in the shape of a guitar pick, and my early crochet attempts could have held water. But for whatever reason, I decided to knit a hat this month — not with needles like my amazingly talented sister, but with my easy-schmeasy Provo Craft Knifty Knitter round loom set.

I’d picked up a free pattern at Jo-Ann Fabric, and then I waited for coupons to buy the yarn. Nothing says my favorite colors like a candy corn hat, and it looked so simple I figured even I could pull it off.

Simple, however, doesn’t mean Abigail-proof. In my typical gung-ho fashion I managed to go about 14 rows on the wrong size loom because I didn’t trust the pattern’s directions (they were apparently more trustworthy than I thought). After starting over, I tweaked the instructions to add a hatband and miscalculated the new number of rows I needed. Taking out stitches isn’t so bad, but trying to re-hook 40-plus loops back onto a loom without letting the stitches slip is tedious.

Preliminary turbulence behind me, I finished the hat without incident. When the weather cools down, I look forward to wearing it as a tribute to my corny sense of humor and as a reminder that directions are there for a reason.

Photos courtesy of my sister

My last post put me on a Edgar Degas kick and reminded me of a jewelry project I made back in March for the “Springtime in Paris” contest hosted by Michaels craft store.

My project was inspired by Degas’ ballerinas: black ribbon chokers, colorful flowers in their hair and on their tutus. His palette is so vibrant, and I took the liberty of using my own favorite color (orange) as the primary theme.

I didn’t win the contest (the winners are quite something, though — check them out here), but I sure had fun making and designing my entry. The contest motivated me to set the creative fires burning, and it gave me a practical reason to do it (always important, I say).

Here are a few of Degas’ dancers that got my muse going.

“The Star (Dancer on Stage)”

Paris has never been my dream vacation spot — I have a feeling the reality is a far cry from the Hollywood-ized, romanticized motif I see in craft stores and home decor. But if someone legit ever gave me a plane ticket and said, “You’re going to Paris,” I’m sure it would set my little heart dancing. I wouldn’t turn it down — I want to go to the Louvre.

To set foot in the heart of idyllic romanticism
To experience the reality for myself,
not through the rosy glass of imagination, but through
my own senses
— the beautiful, the common, the real.
To stand before representatives of the greatest
artwork of the ages,
with air alone
between me and them.

See the colors – the colors! – and hear the strange, fluid voices
rolling into my ears.
I open my wide mouth to
drink it all in.
Whet the wanderlust and call me away
To La Ville Lumiere,
Ah, Paris!
A star of history’s play,
What riches lie in your coffers?
Let me spy on your stores
Feel your pulse
Taste your air.

In the old movie Bathing Beauty (1944) starring Red Skelton and Esther Williams, a eurhythmics instructor tells her dancers to carry themselves with a type of poise that she sums up with a mantra: “I have a secret; I am beautiful; I am beloved.” Although Skelton reduces her grand ideal to slapstick in his typical comic fashion, the motto itself is far from absurd. It captures, with reservations, a truth that really does inspire confidence.

“The Rehearsal of the Ballet Onstage” by Edgar Degas

In our humanistic society, people see confidence as a valuable trait. For example, many companies promote business practices that ‘empower’ their employees, and schools try to boost kids’ self-esteem, but that kind of confidence is easily shaken when circumstances or conditions change.

The only kind of personal confidence that can hold up under any kind of pressure is one that is based on an unchanging, unfaltering foundation. I don’t know any other foundation that fits these criteria except Jesus Christ Himself. In a saving relationship with Him, my life has poise for these reasons:

I have a secret: That I’m a coheir with Christ to an eternal inheritance that’s guaranteed by the Holy Spirit (Ephesians 1:11-14).

I am beautiful: Because God the Father chooses to see Christ’s righteous record where my sinful one used to be (2 Corinthians 5:21).

So yes, that funny old mantra speaks truth. It can inspire a degree of temporary self-confidence when taken at face value, but when viewed through the lens of Scripture, it inspires lasting Christ-confidence.

Happy Christmas to my readers! Today honors the day about 2000 years ago when the Son of God came to earth as a human being to deliver us from eternal condemnation. Through His sinless life, atoning death, triumphant resurrection, and glorious ascension to heaven, those who believe on the Lord Jesus Christ are saved from their sins and declared innocent before God the righteous Judge. Reason to celebrate? Oh yeah.

Speaking of Geese
Blog at WordPress.com.